The History of Nordic Walking

The History of Nordic Walking 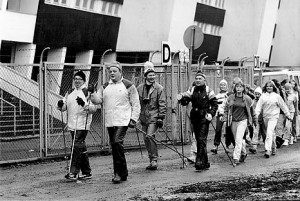 First evidence of walking with the poles for exercise was in 1966, when Leena Jääskeläinen, a physical education teacher in the School of Viherlaakso, Helsinki, introduced “walking with ski poles” into the students’ lessons. She recognized the benefits of using the poles while walking. When Leena joined the PE Faculty at the University of Jyväskylä, she continued to promote what is nowadays known as Nordic Walking, recommending the use of poles as a tool in PE lessons and developing a range of exercises with poles.Another person who had a significant role in the Nordic Walking history was Mauri Repo (1945-2002), the former cross-country skiing head coach of TUL in Finland. In 1979, his publication of “Hiihdon lajiosa” described different training methods for off-season cross-country ski-training. These methods have clear similarities with current Nordic Walking. His methods and statements have also been used in the promotion of Nordic Walking for more advanced and sport-focused Nordic Walkers.In 1998, in the United States, Tom Rutlin started promoting an activity called Exerstriding, a form of walking with poles. However, the technique and equipment was different from the traditional, natural Nordic Walking.

The move to bring Nordic Walking to the attention of the general public as a recreational, physical activity came in the early 1990′s with the work of Tuomo Jantunen, director of Suomen Latu (The Central Association for Recreational Sports and Outdoor Activities). In 1996 Tuomo Jantunen joined forces with Matti Heikkilä, manager of the testing laboratory at Vierumäki Sports Institute and Aki Karihtala, then senior vice president of Exel Oy’s and presently President of INWA. Tuomo Jantunen and Matti Heikkilä, along with their teams, worked with Exel Oy’s product manager Taisto Manninen to develop special poles for this activity. At this time it was described as Sauvakävely (Pole Walking) in the Finnish language. Later, Exel decided to name the activity “Nordic Walking” which is now the term used worldwide. The first Nordic Walking poles were produced by Exel in 1997 and the company also registered a product name” Nordic Walker.”

The “How to introduce Nordic Walking Internationally”-concept was developed by Aki Karihtala. The concept was a mixture of education, information, psychology, products, branding, marketing and media. Finland was used as a pilot country where instructors of Suomen Latu worked together with Exel to introduce the activity and the Nordic Walker poles to the wider public. This co-operation had a remarkable and successful impact on the development of Nordic Walking and sales of Nordic Walking poles. The same concept was then expanded and used in countries where Exel had commercial activities.

In 2000 Aki Karihtala founded INWA (International Nordic Walking Association), which then started developing educational programs and instructor networks for Nordic Walking. Soon after its establishment, other countries started forming associations of which some joined INWA and some started working independently. The media and some of the sporting goods industry joined the movement and Nordic Walking started spreading rapidly around the world.

Needless to say that it is impossible to list down all the fathers and mothers of Nordic Walking in different countries but it is easy to say that without these pioneers, Nordic Walking would not be where it is today.
Best regards,