Since the 1930’s, Finnish cross-country skiers have used poles for their summer training.

1966 – 1996
• 1966 The first documented “walking with ski poles” lessons and promotion outside of competitive sport training were introduced by Leena Jääskeläinen, a Physical Education (PE) teacher in the School of Viherlaakso, Espoo Finland. She promoted ‘walking with poles’ as a physical activity that is suitable for all.

• National TV channel MTV3 broadcasted an interview of Leena Jääskeläinen and a demonstration of Nordic Walking with the students of the Myyrmäki school in Vaanta Finland.
• 1979, Mauri Repo, the former cross-country skiing head coach of TUL in Finland, introduced in his publication “Hiihdon Lajiosa” (cross-country skiing training manual) various off-season training methods for cross-country skiing athletes. Many of these training methods included walking and running with poles.
• 1987 The first ‘presentation’ of walking with ski poles at a public event was made by Leena Jääskeläinen in the Finlandia kävely (Finlandia Walk) in Tampere.
• There were more and more experimental events of “sauvakävely” (walking with poles) and the first articles were published.
• The key person in launching and promoting Nordic Walking was Tuomo Jantunen – Suomen Latu.

• 1995 In the journal Medicine and Science in Sports and Exercise, the first scientific articles were published about energy expenditure in pole walking versus walking.
• 1996 Collaboration starts between Suomen Latu, Sports Institute of Vierumäki and sports company Exel, a manufacturer of poles.

1998
• International promotion of Nordic Walking starts in the Scandinavian countries.
• A presentation is made to the Finnish President Martti Ahtisaari and his wife.
• 160,000 Finns practise Nordic Walking regularly while 520,000 have tried it (Suomen Gallup) (Population of Finland is 5.3 million).
• National Award “The Health Promoting Action of the Year” (Vuoden Terveysteko) is given to Suomen Latu.
• First Nordic Walking video in Finnish.
• A photo of Pope John Paul II Nordic Walking appears in the Sunday Times.

1999
• Nordic Walking is introduced in Switzerland, then in Germany and Austria.

2001
• Exel is a finalist of the ‘Brand New Brand’ competition with the Nordic Walking concept at the International Sporting Goods Exhibition (ISPO) Winter 2001.
• Germany and Austria are the first official INWA-member countries.
• First international Nordic Walking video is produced in co-operation between INWA and Exel.

2002
• The “Nordic Fitness Sports” concept is introduced.
• The first INWA Convention was held in Vierumäki Sports Institute in Finland.

2003
• The number of participants in Nordic Walking worldwide doubled from one million to over two million.

2007
• On 30th September, in Buenos Aires, INWA is approved as a member of TAFISA, the worldwide Sport for All organisation.

2010
• There are Nordic Walking activities in approximately 40 countries, and it is a growing trend in many parts of the world.
• Celebrated 10 years of INWA Nordic Walking during the INWA Convention in Otepää, Estonia and Riga, Latvia in September.
• INWA organised the first World Nordic Walking Day (10.10.10), with a series of events across the world.

2011
• International trainers supported the National Nordic Walking organisation in Slovenia during the National Convention in Kranjska Gora.
• The educational committee launched a new version of the instructor manual during the annual INWA convention in London 2011.

2016
• Marco Maas, International Trainer, and his team trained 31 instructors in Qinghai, and 71 National Trainers at the University of Sport in Beijing.
• Instructor course in Zhan Jiang, 50 participants from 19 universities took part.
• The first International Nordic Walking Challenge in Qinghai was organised.

2018
• INWA World Cup in Yixing in China and in Carnikava Latvia.
• In Krasnoyarsk, Russia, the RNWA organized a mass event. Nordic Walking grows quickly in Russia.
• INWA has 21 member countries by the end of 2018.

2020
• Introduction of INWA training levels and criteria
• Instruction procedure how to become National Trainer
• Introduction of the guidelines and concepts to develop Nordic Walking under the restrictions of Covid-19 pandemic.
• Cancellation of INWA’s Annual Convention in Croatia due to COVID-19
• Development of Nordic Walking by INWA continues….
• Due to the COVID-19 limitations INWA annual general meeting by zoom
• December 15th INWA celebrates the 20 years anniversary by zoom 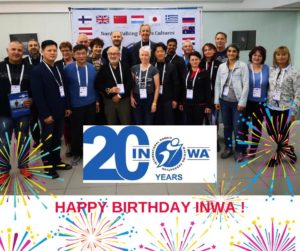