Nordic Walking Convention organized by Russian Nordic Walking Association, INWA member since 2010, took place in Moscow region on 09-10th December. The event attracted 75 INWA Activity Leaders and INWA Instructors from about 15 cities of Russia, from Petrozavodsk to Khanty-Mansiysk.
Those were two very busy days. The convention program included lectures, practical outdoor trainings and discussions. There was no spare minute. Many important issues on Nordic Walking promotion in Russia were discussed during the Convention. The content was very useful for the participants.
The convention began with the speech of RNWA President Andrey Samoilenko. He announced the results of 2017 and thanked the participants for their great contribution to Nordic Walking promotion in Russia. Andrey Volkov, INWA National Trainer and Head of RNWA Education Department, gave two lectures. The first lecture was about NW researches, the second one raised the problem of osteoporosis and sarcopenia. Vadim Deineko, INWA National Trainer, also gave two lectures, one on the advantages that Nordic Walking technique gives a person (as compared to other techniques of walking with poles), and the second lecture was about dorsopathy of lumbosacral. Alexander Mamontov, INWA National Trainer and Head of RNWA Development department, presented INWA Competition rules and spoke on plans for 2018. Victor Baranov, Head of Scandi Nostra Team, attracted the participants’ attention to NW safety issues. There was also a large block of presentations devoted to NW trips around and outside Russia.
At the end of the first day of the Convection, there was a gala dinner. RNWA prepared a surprise for the participants – two large delicious cakes with RNWA logo!
The program of the practical part of the Convention included personal technique review and new exercises for warn-up and stretching. The participants also shared their know-hows with each other. It was really great!
There are always Nordic walkers who do more than others for NW promotion. Five people were granted the title Russian Nordic Walker 2017 for their work this year. They are Sergey Potapov, Mila Zorina, Lidia Eliseeva, Victor Baranov and Elena Mazurova. Exclusive poles were given them as a present. And Anastasia Shakhtorina was granted with diploma for the Best Nordic Walking Event 2017.
The RNWA Convention was a great success. The participants got a lot of new information on NW, many new ideas how to develop NW in their cities. It was a real joy to see everyone! See you next year! 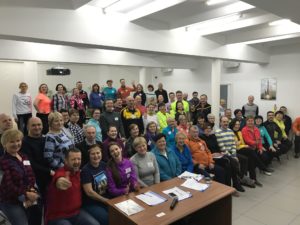 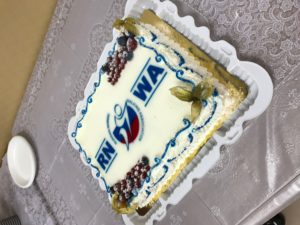